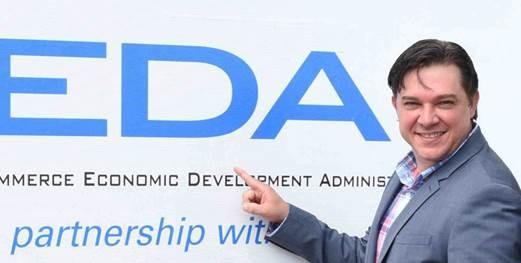 My name is Juan Bauza and I’m the Economic Development Representative (EDR) for Puerto Rico and the U.S. Virgin Islands in the U.S. Economic Development Administration’s (EDA) Philadelphia Regional Office. My main responsibilities are to build strategic economic development partnerships and develop meaningful projects within EDA’s program portfolio that result in job creation/retention, private investment leveraged, and above all, projects that stimulate long-term economic vitality.

I was born in Ponce, Puerto Rico, and am the youngest of four siblings. I also lived in Barceloneta, Puerto Rico, Bolivia, and the Dominican Republic before moving back to Puerto Rico. It sounds like the early childhood of a military brat, but no, I was an agricultural brat, if there is such a thing. My dad was, and still is, an agribusiness innovation developer, so where he was assigned to develop an Ag enterprise, the whole family followed. This gave us a lot of exposure to cultural diversity and respect for the complexities of socio-cultural differences as we were, for the most part, the outsiders, yet we were always taken in by the community. Today, this cultural sensitivity has played a significant part in my ability to do my job.

Prior to joining the federal government, the book called “From Good to Great” triggered my need to level up, coupled by a driving quote in my life to “Lead, follow, or get out of the way,” and the influence of my father’s living example all propelled me to keep moving forward to be successful.

The inspirations noted above have helped drive my interest in the transformational economic development initiatives that I now support throughout the U.S. territories in the Caribbean and will serve to strengthen the flow of commerce and trade at the national level.

Hispanic Heritage Month is an opportunity of extreme significance, and also bears a lot of responsibility for the Hispanic community. We are recognized as a distinctive group that has made significant socio-economic contributions to American society. So for me, it means that as a Hispanic I have to raise the bar, I can’t ride the wave, I have to honor the legacy of those Hispanics that paved the way and that made great contributions to our way of life despite the challenges of their times, so that today we can honor them with our actions and celebrate Hispanic Heritage Month! I am proud to be a Puerto Rican and a Hispanic and to celebrate the many aspects of Hispanic Heritage Month including the Hispanic culture, work ethic, humility, resilience, and the determination to overcome for the love for those you call family, and the loyalty to friends and country.

As a career civil servant, I’ve learned that it’s not money, status, or recognition that drives you. It’s the commitment to do something bigger than yourself, that you are held to higher standard. That while you serve, no matter if it is in the U.S. military, within the U.S. Department of Commerce or other areas of the federal government, that your actions, or inactions, are going to impact the lives of others.

Ed. note: This post is part of the Spotlight on Commerce series highlighting the contributions of Department of Commerce Hispanic employees in honor of Hispanic Heritage Month (September 15--October 15).