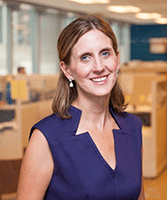 Skills for Chicagoland’s Future is a public-private partnership working to match businesses that have current, unmet hiring needs with qualified, unemployed or underemployed job seekers. Ms. Lynch has spent the last 19 years providing strategy, operational, and financial management expertise to nonprofit and government organizations in the Chicagoland area. Previously, she launched and served as president of Chicago Career Tech. and spent eight years working for the YMCA, most recently at the YMCA of Metropolitan Chicago as Executive Vice President of Human Services and Housingand formerly as the Director of Operations for the YMCA of the USA. Prior to her four years as a Senior Manager at Deloitte, Ms. Lynch worked in the City of Chicago Mayor’s Office.