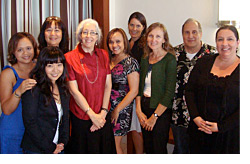 In 2006, EDA invested $300,000 in the Maui Economic Development Board (EDB) in Hawaii to support the Women in Tech (WIT) project, which was started in 1999 and is currently administered by the Maui EDB. The founders of the WIT project were alarmed by data showing that the U.S. would be looking at a critical shortage in the technology workforce by 2012. The founders also viewed women and minorities as the largest under-utilized resource of potential in science and technology. The statistics indicated that in order to maintain the present number of scientists and engineers in the U.S., the enrollment and retention of women and minorities needed to rise from less than 25% to 75%.

The WIT project was developed to address this workforce development need. Partnerships were formed with educators and businesses to create a pipeline from education to employment in science, technology, engineering and math (STEM) on a state-wide basis.

By tapping into a non-traditional resource, this pipeline is helping to bring a new generation of highly skilled workers into STEM careers throughout Hawaii and helping Hawaii to keep pace with the changing technological landscape.

This goal of improving the economic quality of life for women by encouraging them into higher paying technology occupations is accomplished through mentorship, internships, facilitating job placement, and training employers and labor unions on strategies to recruit and retain women into apprenticeships and non-traditional employment. The target programs include: Kamaaina come home, mentornet and the Ke alahele program.

In 2003, EDA invested $1.75 million in the Waianae Coast Comprehensive Health Center in Waianae, Hawaii to expand its facilities and construct a new Women's Health and Training Center. The Center is located in the Native Hawaiian Homeland area that is one of the poorest in the State of Hawaii. While Hawaii residents enjoy one of the longest life spans in the nation, Native Hawaiians have one of the shortest life spans of any group in the United States. The Center was the largest single employer along the Waianae Coast when its Board committed the organization to provide community residents with education and training in the healthcare field, breaking the cycle of second and third generation welfare, particularly for women, and "growing their own healers".

They saw good education and meaningful employment as vital to the physical, mental, emotional and spiritual health of the community. In creating its seamless health career's pipeline, the center developed a training and educational program leading to health professions and health-related careers that was supported by the Harry & Jeannette Weinberg Foundation, the Robert Wood Johnson Foundation, the Hitachi Foundation, Leeward Community College and EDA. The Center provides health care track training in med tech, pharmacy tech, X-ray tech, nursing, and now osteopathic medicine to community residents, in particular women. About 100+ graduates enter into high paying health career positions annually. The Center has the strong support of the major hospitals, doctors, clinics and healthcare facilities throughout the State.