Last Friday was the kickoff meeting for NACIE 2.0 – the Department of Commerce’s National Advisory Committee on Innovation and Entrepreneurship. I was proud to join my fellow committee members to address global competiveness. Without question, the meeting started in what can only be described as a sprint out of the blocks. We began the morning with Secretary Pritzker asking us what transformational investments and policies the Federal Government facilitate to help communities, businesses, and workers be globally competitive. By the end of the day we were presenting a list of ideas with the potential to answer this charge. Additional comments from Julie Lenzer, Director of the Office of Innovation and Entrepreneurship, and Tom Kalil, Deputy Director of Policy for the White House Office of Science and Technology Policy, helped frame the opportunities ahead.

A new and welcomed feature of NACIE 2.0 is three subcommittees focusing on innovation, entrepreneurship, and workforce development. I’m looking forward to serving on the workforce subcommittee. At JPMorgan Chase, we’ve just completed the first year of New Skills at Work, a five-year, $250 million global initiative supporting the development of data-driven workforce training and education solutions to help address the mismatch between the needs of employers and the skills of current job seekers. It’s an honor to serve with such distinguished members of NACIE and to have a voice in this national conversation about innovation and entrepreneurship. This is an especially personal topic to me. Innovation and entrepreneurship are in my blood – and a part of my heritage. I’m the son of international students from China who sought – and largely achieved – the American dream in Delaware, where I grew up and first discovered my love of science and technology.

Like the children of many immigrants, I was born with high expectations from my high-achieving parents. My late father was an accomplished DuPont polymer engineer, process inventor, and NASA Lifetime Achievement Award-winner. My mother helped found the University of Delaware’s clinical chemistry department. As you can imagine, there was a lot of pressure on me and my siblings to excel.

Highlight: An Innovative Year at EDA 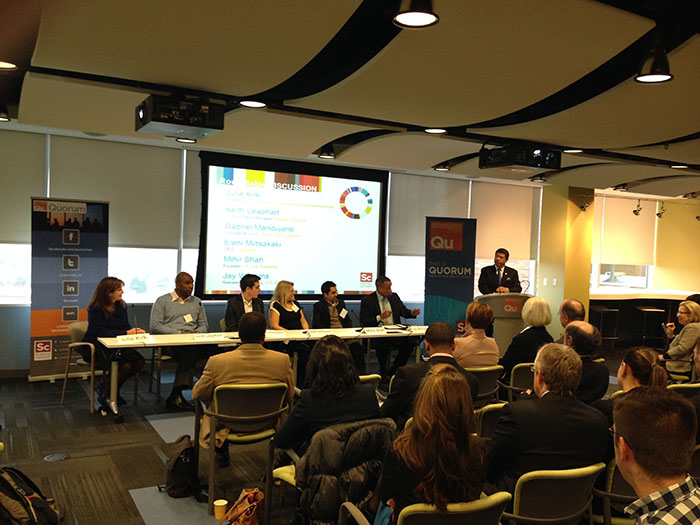 Innovation is a huge priority for the Department of Commerce. Promoting innovation and entrepreneurship is one of the five pillars of the strategic plan, and it permeates the activities across the entire department. In April, Secretary Pritzker chaired the first meeting of the President’s Ambassadors for Global Entrepreneurship (PAGE), which is a group of successful American businesspeople who have committed to sharing their time, energy, ideas, and experience to help develop the next generation of entrepreneurs.

This year, EDA has made tremendous strides in its efforts to promote and foster innovation. In May, Secretary Pritzker announced Julie Lenzer’s appointment as the Director of the Office of Innovation and Entrepreneurship (OIE). In the little over six months since Julie came aboard, OIE has worked to fill the 2014-2016 National Council on Innovation and Entrepreneurship (NACIE) board, launched a Regional Innovation Strategies program, and has emphasized the vital role economic development plays in fostering innovation.

Spotlight: A Banner Year for IMCP 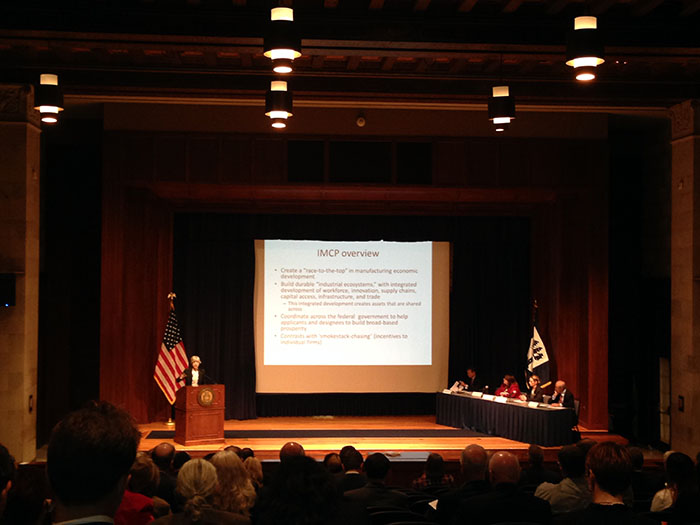 American manufacturing is experiencing a renaissance. Manufacturing jobs are highly technical, well-paid jobs – not the gritty factory jobs of yesteryear. Promoting manufacturing is a major priority for President Obama, Secretary Pritzker, and the Economic Development Administration, which is why the Investing in Manufacturing Communities Partnership (IMCP) initiative is so critical. IMCP is designed to revolutionize the way federal agencies leverage economic development funds by incentivizing the development of comprehensive economic development strategies that will strengthen their competitive edge for attracting global manufacturer and supply chain investments. Through IMCP, the federal government is rewarding best practices – coordinating federal aid to support communities’ strong development plans and synchronizing grant programs across multiple departments and agencies.

In May of this year, Secretary of Commerce Penny Pritzker announced the first 12 designated manufacturing communities under the IMCP initiative. Of the more than 70 communities that applied, the 12 were selected by an interagency panel based on the strength of their economic development plans, the potential for impact in their communities, and the depths of their partnerships across the public and private sector to carry out their plans. Secretary Pritzker has repeatedly affirmed that the mission of IMCP is integral to the success of the Department of Commerce as a whole, noting that, “IMCP is a critical part of our ‘Open for Business Agenda’ to strengthen the American manufacturing sector and attract more investment to the United States.” 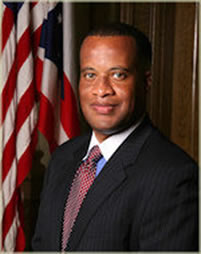 It’s hard to believe that another year is nearly behind us. As 2015 approaches, I wanted to take a moment to reflect on 2014 and all of the great work EDA and our partners have embarked on. I think it’s safe to say that 2014 was an eventful year for the agency. I was honored to be confirmed as the Assistant Secretary and spearhead EDA’s efforts to support the Department of Commerce 2014-2018 Strategic Plan. To that end, EDA has made 648 investments in 2014, totaling nearly $240 million that support all pillars of the plan: innovation, data, environment, trade and investment, and operational excellence.

We have made incredible strides in implementing the Investing in Manufacturing Communities Partnership (IMCP) initiative and building our Office of Innovation and Entrepreneurship (OIE). I encourage you to read about our efforts in greater detail in the stories below.

Innovation Support is in Demand What do you get when you take a $15 million Regional Innovation Strategies program and add 254 applicants requesting more than $100 million in support? You get a very busy Office of Innovation and Entrepreneurship and compelling evidence that this program is crucial.

The Regional Innovation Strategies program was launched in September 2014 to spur innovation capacity-building activities in regions across the nation. Under this program, EDA solicited applications for three separate funding opportunities, including: the i6 Challenge, Science and Research Park Development grants, and cluster grants to support the development of Seed Capital Funds:

i6 Challenge: The i6 Challenge, now in its forth iteration, is focused on accelerating the commercialization of technology. The 2014 i6 was broadened from the three previous challenges to include scaling of existing centers or programs and funding for later-stage Commercialization Centers. > Read more

Shortly after being sworn-in as Assistant Secretary of Commerce for Economic Development in May, I traveled to Anchorage, Alaska on my first official trip. There, I participated in the National Congress of the American Indians’ (NCAI) mid-year conference entitled, “Claiming our Rights and Strengthening our Governance” where I had the opportunity to meet with tribal leaders from across the country and to participate in a focused discussion on the importance of developing modern trust management systems and creating the conditions for economic growth on tribal trust lands.

Building on this engagement, I was honored to be asked to moderate the “Strengthening Tribal Economies – Jobs, Energy, Housing, and Infrastructure” breakout session, a vital component of the White House Tribal Nations Conference that is taking place in Washington this week.