Jobs and GDP: Not What You Think

Many private-sector forecasters are expecting GDP growth to hit a bit of an air pocket in the first quarter of 2011 before growing at a pace above 3 percent for the remainder of the year. But the temporary deceleration in GDP Blue Chip forecasters are expecting coincides with an increase in private payrolls of 564,000 from December to March, the fastest pace of growth so far in this recovery. How can economic growth slow when employment is picking up? Well, this result is not unusual it turns out. As shown in the figure below, the relationship between private-sector job growth and GDP growth on a quarterly basis has been surprisingly weak over the course of the first two years of the past three economic recoveries (and “surprisingly weak” is an understatement as the correlation between the two series is almost 0). In late 2009 and early 2010, during the current recovery, we saw a combination of good GDP growth but weak employment growth, and wondered, where are the jobs?” 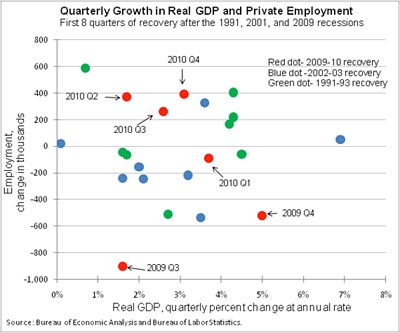