A new report from the Department of Commerce shows that manufacturing jobs live up to their reputation as good jobs. 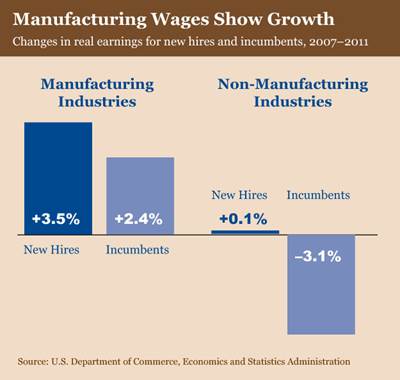 Manufacturing jobs created in recent years are well-paying jobs, according to a report released in late August by the U.S. Commerce Department’s Economics and Statistics Administration (ESA). The report found that new hires in manufacturing had 38 percent greater monthly earnings than new hires in other sectors at the end of 2011. The monthly earnings premium for the manufacturing workforce as a whole, including both new hires and incumbents, was 25 percent. This earnings premium results from both greater hourly earnings and from more hours of work per month.

Other findings of the report include:

Speaking to a gathering of U.S. manufacturers in Orlando, Florida, on August 21, U.S. Secretary of Commerce Penny Pritzker noted the significance of these findings. “Companies like yours are making and selling great products around the world at an all-time record pace. ‘Made in America’ is stronger than ever. … And just this week, we got even more good news. New hires in manufacturing had 38 percent higher monthly earnings that those in other sectors. So what’s clear is this: America’s new manufacturing jobs are good-paying jobs.”

The complete report can be found on the ESA website.