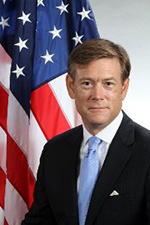 In recognition of world trade month, May’s edition of Innovate@EDA is focused on trade and investment. A key pillar of the Department of Commerce Open for Business strategic plan, improved trade and investment drives economic growth. It may surprise you to know that EDA plays a critical role in the trade and investment arena. Specifically, EDA investments build and improve community capacity to attract more foreign-direct investment and increase exports. Put simply, EDA enables communities to more effectively compete in a global economy.

This month, you’ll read about collaborative efforts at Commerce and with other federal agencies to promote global trade, investment, and entrepreneurship. As you’ll see throughout this issue, economic development at the community level catalyzes impact on a global scale.

In closing, I would like to say a few words about the passing of Congressman Jim Oberstar from Minnesota and how important he was to EDA.   Congressman Oberstar helped found the agency in 1965 when he was serving as a staff member for the House of Representatives.  Throughout his 36 years as a Member of Congress, he was one of the strongest and most vocal allies for EDA.  His legacy of support to industry and the American workforce, through the initial Public Works and Economic Development Act of 1965, and later through his support of the American Recovery and Reinvestment Act, will live on in the jobs he helped create; jobs that helped to put Americans back to work.  Even after leaving Congress in 2011, Congressman Oberstar remained a friend to the agency—writing op-ed columns, giving radio interviews, and working with his former colleagues to defend and promote the agency. We at EDA, and the country, will miss him greatly.

Thank you for your continued interest and partnership.