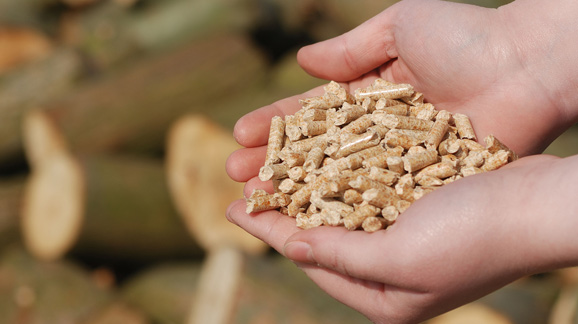 Academia, government, and the private sector are constantly puzzling out ways to increase trade and exports. Export policy can be complicated, but increasing exports can be as simple as constructing a new rail spur.

In order to achieve the targets for cutting carbon emissions in Germany and in Europe as whole, the use of biomass for power generation is essential. However, the European wood market could not keep pace with the increasing demand for resources in this fast growing sector.

In 2010, local authorities in Waycross, Georgia, successfully concluded negotiations with a German energy firm, RWE Innogy, to build a new $135 million wood pellet manufacturing plant in the Waycross–Ware County Industrial Park. The pellets, which are produced from locally-sourced wood, are used as a cleaner-burning substitute for coal in the generation of electricity. But, the authorities in Waycross were faced with a challenge: how could these pellets be shipped quickly and cost effectively to major transportation hubs?

In 2010, EDA provided a $1.3 million grant to Ware County to help build a new rail spur, ensuring that the pellets could be shipped to the port of Savannah and from there to overseas buyers. In May 2011, the Georgia Biomass plant went online, and now the company has approximately 80 employees producing about 750,000 tons of wood pellets annually that are shipped to buyers in northern Europe. The wood pelleting plant operated by Georgia Biomass in Waycross is the largest of its kind in the world and has spurred the creation of new jobs at local timber firms due to the increased demand for their raw materials. This spill-over effect shows how important exports can be to the health of a regional economy, spurring increased sales and job creation in related sectors.

While increasing exports is a big idea, it doesn’t mean that all the answers are big ones. Sometimes, something as simple as a rail spur can open up markets that are an ocean away.