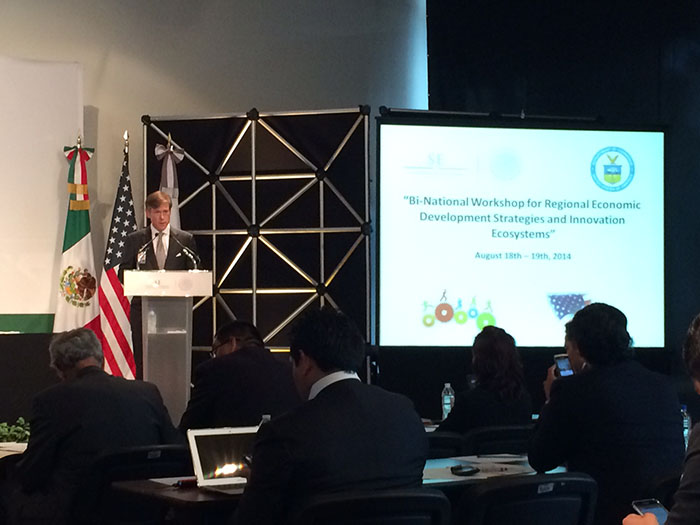 Economies don’t fit into neat borders of cities, counties, or states. Along the U.S.-Mexico border, they don’t always fit neatly into countries either. There are roughly 2,000 miles of shared border between Mexico and the United States that create a dynamic commercial relationship that generates more than $500 billion in two-way trade and supports millions of jobs in both countries.

Recognizing this, in May 2013, President Obama and President Peña Nieto announced the formation of the High-Level Economic Dialogue (HLED) to promote economic growth in both countries, create jobs for citizens on both sides of the border, and ensure that the United States and Mexico could compete globally. The first HLED was launched in September 2013, which developed a work plan based on the pillars of promoting competitiveness and connectivity; fostering economic growth, productivity, entrepreneurship, and innovation; and partnering for regional and global leadership. The initiative is spearheaded by Department of Commerce’s International Trade Administration, and EDA has worked with ITA on several key areas:

Deputy Assistant Secretaries Matt Erskine and Tom Guevara traveled to Mexico last month to join in discussion about the Border Regions Economic Development Strategy (BREDS) to lay the foundation for future planned conferences.  They stressed the fact that in the border region, U.S. and Mexican communities have unique advantages in context of their assets, capabilities, and culture.  These cross-border regions should work jointly to understand their local assets and market themselves as comprehensive economic regions that can serve the Mexican, American, and global markets. BREDS is an economic road map that intends to diversify and strengthen the local economy. It aims to:

EDA also seeks to build on the recently launched Cluster Mapping Registry and facilitate the alignment of the standards for mapping clusters and regional economies to develop a shared registry of cross-border regions.

Finally, EDA has been an active participant in the Americas Competitiveness Exchange program, helping to show delegates from all over the Western Hemisphere what can be accomplished with strategic investments and effective public-private partnerships.

We share more than a border with Mexico. In many places, there is a symbiotic economic relationship between our two countries. We are now working together to ensure success and prosperity for both economies and both countries, and these HLED efforts are an important first step.