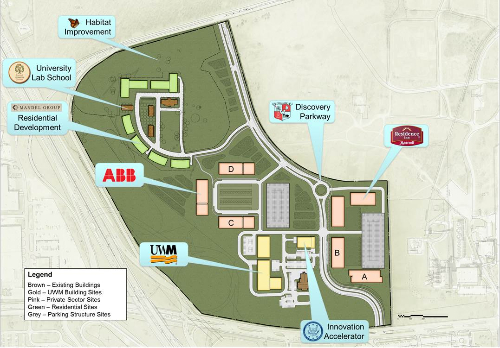 Map of the UWM Innovation Campus

In 2008, flooding devastated the City of Wauwatosa, Wisconsin. Heavy rain, winds, and several tornadoes had caused lakes, rivers, and creeks to overflow, literally washing away homes and businesses. The manufacturing sector was particularly affected, which contributed to a rise in unemployment. The entire state of Wisconsin was declared a disaster area in June of that year, and the long task of rebuilding began with help from several federal and local agencies. As things were slowly put back together, the City of Wauwatosa and the University of Wisconsin-Milwaukee Real Estate Foundation, Inc. opted to think about the long-term resiliency of the region’s economy and began working on a plan.

In 2010, the two organizations received an EDA grant for $5.4 million to construct a LEED silver certified industry accelerator facility with world class laboratories. The facilities funded by the EDA grant were part of an innovation campus that the city and University of Wisconsin at Milwaukee (UWM) created to nurture advanced manufacturing businesses. This blend of higher education with business initiatives minimizes technology transfer difficulties and helps the region’s pillar sector of manufacturing recover from the floods of 2008 and the subsequent rise in unemployment. The Innovation Campus already credits over 325 jobs and $15 million in private investment to the development of the Accelerator project.

"This project will have an impact on economic development that reaches far beyond the building itself,” said David Gilbert, Executive Director of the UWM Innovation Campus. “Industry partners are attracted to the Innovation Campus and indeed the region to access the mix of services in the Innovation Accelerator that are not otherwise available in Southeastern Wisconsin. This strategic investment by the Economic Development Administration has put into motion a regional economic development effort that will increase the return on investment exponentially.

The UWM Innovation Campus is working to create a setting that will serve as a catalyst for strong and enduring partnerships among UWM and a wide range of other research institutions and research intensive businesses located in the Milwaukee County Research Park. Construction of the building finished in 2014, and the grantee is currently in the process of commissioning the labs and hiring staff to run them.

Earlier this year UWM fully equipped the prototyping lab, which was at the heart of the grant application, and is looking for a manager to run it. The facility also has its first tenants: the industrial design company Brooks Stevens and Bridge to Cures, a non-profit that helps start companies in the pharmaceutical area. The Bioengineering, Biosensing, and Mobility labs that work with hundreds of companies are all in the process of getting commissioned and staffed up, and two of the scientists in the building have already created spin out companies taking their products to market. Nanoaffix has created new ways of combining nanocomponents to produce valuable technologies and will be located in the facility. Therabracelet is a wristband device that increases the sensation of touch, movement, and fine motor skills in the hands.

This is all just the tip of the iceberg. As more labs get commissioned and staffed up, more innovation will be fostered, more jobs will be created, and the region will become more resilient. There’s no telling what ground-breaking ideas will come next. Perhaps the UWM Innovation Campus will not only safeguard the region’s economy against future natural disasters but will find ways to potentially prevent them.