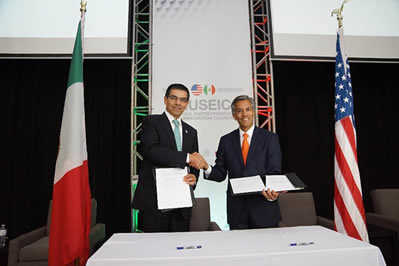 On August 5, 2016, Deputy Assistant Secretary for Regional Affairs, Thomas Guevara signed a Cooperation Arrangement between the U.S. Department of Commerce’s Economic Development Administration and Mexico’s National Entrepreneurship Institute (INADEM). The agreement aims to facilitate the linkages of clusters in the United States and Mexico to form strategic partnerships across North America.

The signing took place during the Fifth Annual Meeting of the Mexico-U.S. Entrepreneurship and Innovation Council (MUSEIC) in Tijuana, Mexico. This meeting, which brought together entrepreneurs, government officials, businesses, academic institutions, and innovators from the United States, Mexico, and Canada, was an opportunity to highlight the group’s accomplishments and push for continued progress on key issues to strengthen the entrepreneurship ecosystem in North America. MUSEIC is a component of the U.S.-Mexico High Level Economic Dialogue, launched in 2013 by President Barack Obama and Mexican President Enrique Peña Nieto, to elevate and strengthen the bilateral commercial and economic relationship.

One of the achievements highlighted at the MUSEIC meeting was the publication of Mexico’s National Cluster Map, which identifies areas for investment and job creation, and enhances regional economic development between the United States and Mexico. The map is available to users around the world as a free, open website, and is compatible with the U.S. cluster mapping website. This project is the culmination of extensive collaboration between the United States and Mexico to ensure the maps can be used in a binational fashion.

During his remarks, Deputy Assistant Secretary Guevara applauded this project’s completion and underscored the value of the maps. “The introduction of Mexico’s cluster map is an unprecedented opportunity for Mexico to participate more fully in a global economy characterized by innovation, research and development, and emerging sectors. And, it is an even greater opportunity for North American countries to start to compete globally as one economic region. U.S. and Mexican communities within the border region have not always had the ability to leverage their assets, capabilities, and culture towards regional economic prosperity. Now, with the introduction of the compatible cluster maps, these cross-border regions will have an easier time identifying joint assets, increasing collaboration, and developing shared objectives.”

The President of INADEM, Enrique Jacob Rocha, pointed out, “The linkage of clusters in Mexico and the United States has been strengthened by the signing of this agreement to consolidate the strategic bilateral relationship and enhance the global value chain. This is the result of a fully integrated strategy that promotes the interchange of specialized knowledge to foster economic and technological regional development. In this regard, I welcome this initiative as an innovative mechanism to strengthen bilateral cooperation.”

The compatibility of the U.S. and Mexican cluster maps is just the beginning. The real work lies in getting stakeholders to use them as tools for investment, economic development, and job creation. Thus, through the Cooperation Arrangement, Commerce and INADEM will:

Commerce’s contribution will be led by the International Trade Administration (ITA) and the Economic Development Administration (EDA). ITA has a global network of experts located in more than 100 U.S. cities and three cities in Mexico that give U.S. businesses access to services, such as counseling on developing an international business strategy and increasing brand awareness abroad, and connects businesses with new markets, business partners and customers. In addition, ITA provides easy access to information about federal-level programs and services related to business investment. EDA funded the development of the U.S. Cluster Map and registry, and leads the federal economic development agenda by promoting competitiveness and by preparing the nation’s regions for growth and success in the worldwide economy. EDA makes investments in economically distressed communities in order to create jobs for U.S. workers, promote American innovation, and accelerate long-term sustainable economic growth.