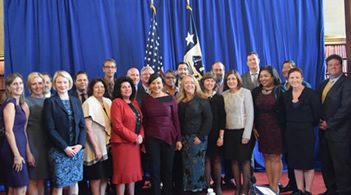 The Obama administration strongly believes that our country is at its best when we harness the talents of all parts of our society, and our greatest accomplishments are achieved when diverse perspectives are brought to help overcome our greatest challenges.

On October 6, 2016 the Department of Commerce welcomed 30 diverse leaders in innovation, entrepreneurship and employer-driven talent development from across the country to the National Advisory Council on Innovation & Entrepreneurship (NACIE).

NACIE is charged with identifying and recommending solutions to issues critical to driving the innovation economy in America, including enabling entrepreneurs and firms to successfully access and develop a skilled, globally competitive workforce.

Operating as an independent entity managed through EDA’s Office of Innovation and Entrepreneurship, NACIE members serve two-year terms and work collectively to identify new ways to take great ideas from the lab to the marketplace, to drive economic growth and create jobs in America.

The following two days marked the council’s official transition to NACIE 3.0. Newly appointed members kicked off their first meetings at the White House and Department of Commerce for orientation and introductions, roundtable discussions and a “lessons learned” panel with former council members. On October 7, members began establishing the priorities of their term by using design thinking at the U.S. Office of Personnel Management’s Innovation Lab. 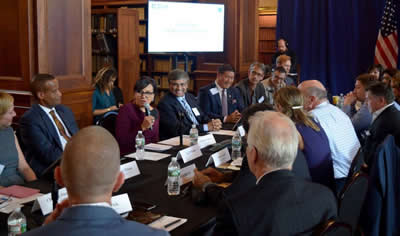 NACIE 2.0 board members report out accomplishments to Commerce Secretary Penny Pritzker during the leadership transition meeting.

A standout quality of NACIE 3.0 is their diversity. The members of the new council—five of which returned for a second term — are nationally recognized leaders representing different demographics, organization size, industry sector, and geographic regions.

It is this diversity that will provide a balanced viewpoint as the group works together to tackle issues associated with the advancement of innovation and entrepreneurship over the next two years.